Our extract lab at Eagle Moon Hemp use two primary methods to extract the goodness from the raw hemp to bring you our amazing CBD products.

Using state of the art methods allows us to separate those compounds we do not want and keep those that we do. Which in turn allows us to produce top shelf CBD extracts and the finest CBD products at wholesale. We currently use two processes to extract CBD. The first is called an Ethanol Wash and the other is called CO2 Supercritical Extraction. 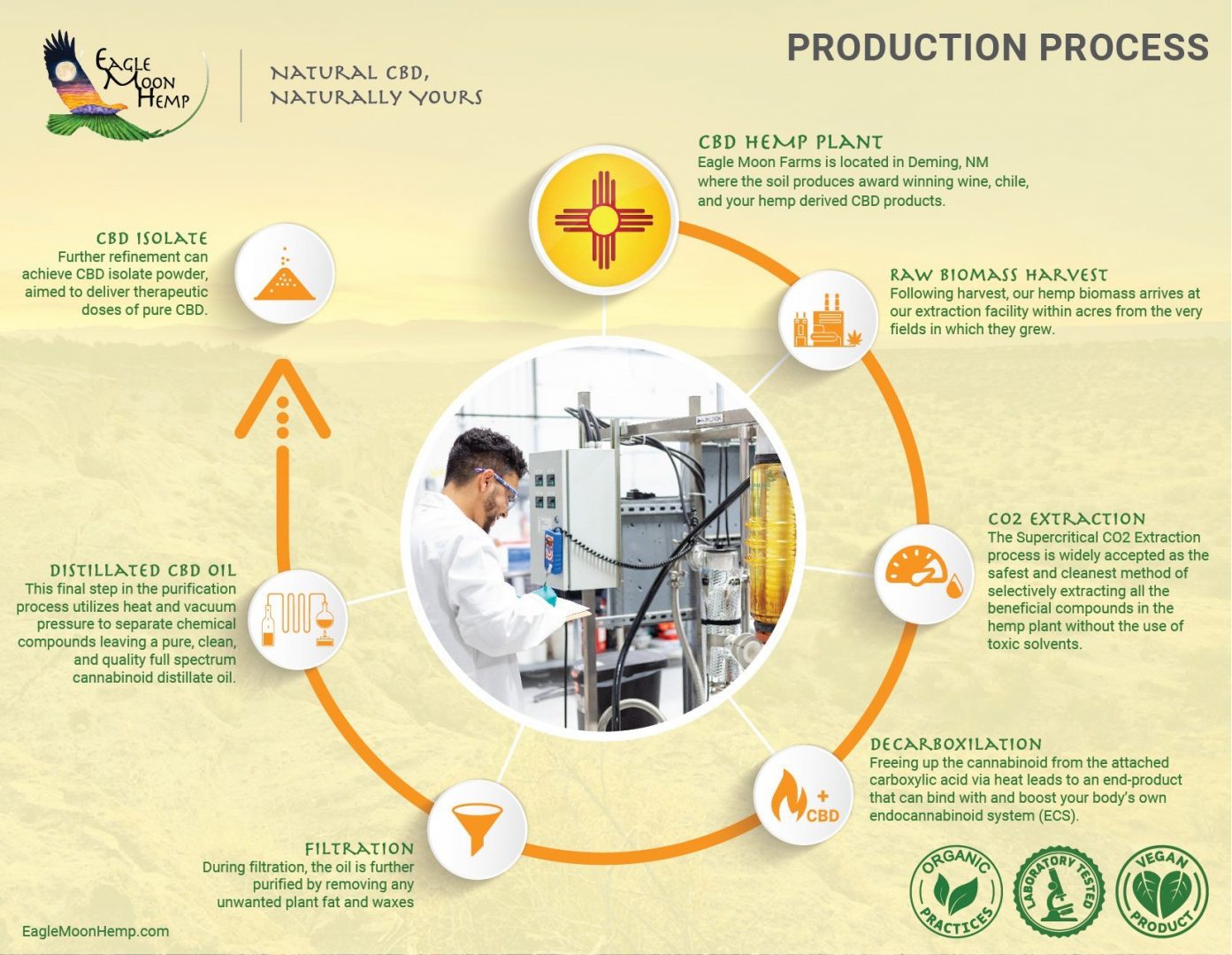 The benefits of CO2 extraction are it is quick, clean, and safe. It also allows us to create CBD oil without having to process it too much afterward. CO2 supercritical extraction starts with raw hemp biomass then using carbon dioxide under high pressure and high heat we allow it to saturate the raw hemp. This allows the cannabinoids and other compounds to dissolve in the CO2. Towards the end of the process, the carbon dioxide is reclaimed, leaving behind a full spectrum crude hemp oil with no traces of CO2. We then put that crude CBD oil through a process known as winterization where the oil is mixed with warm ethanol. Once we cool this solution, it allows us to remove the unwanted compounds from the oil and to remove any lipids or wax left behind. After winterization, the next step is called ethanol recovery where the ethanol is removed from the mixture, leaving behind just the crude CBD oil.

Most cannabinoids and other compounds in hemp are only obtainable once heated to a proper temperature in a process known as decarboxylation. The other option is to use something such as alcohol to dissolve the desired compounds into a solution. Ethanol wash is the other process we use to obtain cannabinoid-rich oil. It begins by soaking the raw hemp biomass in ethanol, which allows the compounds to be absorbed. After these compounds are collected the ethanol is ready for the next step in the process which is ethanol recovery. If this sounds familiar it should. Ethanol recovery is the same process we use in our CO2 supercritical extraction after the second step of winterization. Once we reach the step of ethanol recovery the extraction process is the same for both methods.

After recovering the ethanol from the mixture, we then move on to what is called short path distillation. It is called as such because the distillation only typically takes place over a few centimeters. This step heats the oil under pressure to reduce the boiling point of the distillate. It is a great procedure for any compounds that are destroyed at higher temperatures. Short path distillation separates any remaining ethanol, unwanted terpenes, or high volatile cannabinoids from the extract. Leaving us with a very pure extract that only needs very little processing beyond this step.

The extract then proceeds to the final step which is called wiped film distillation. With this technique, the oil enters under high pressure into a rotating wiping system that distributes the extract into a thin film on a heated surface. This process helps to further remove any other unwanted compounds from the wanted cannabinoids such as CBD. After the wiped film distillation, we have one of our final products, the CBD distillate.

After obtaining the CBD distillate we can use it to manufacture a variety of CBD infused products or sell it directly to the consumer. The process does not have to end there, though. We can put it through another process called crystallization in which we use pentane and mix them until a homogeneous state is achieved. Once we cool the solution down the CBD will crystallize and fall out of the rest of the solution. This process creates our CBD isolate which is 99.5% CBD and the finest you can get.

What Are The Benefits Of Extracting CBD?

Eagle Moon Hemp Farms is pleased to bring you some of the best hemp in all of the American Southwest. Hemp has been used for millennia by ancient cultures and modern cultures alike. Aside from the obvious psychoactive effects of the plant, it has many other beneficial uses. Some of those uses include, but are not limited to making rope, paper, and clothing as well as a variety of oils and consumables. The hemp plant is full of all kinds of beneficial flavonoids, terpenes, and cannabinoids the problem is that all of these great compounds are locked up in the hemp plants themselves. Other than smoking or making edibles at home using hemp flower, we have to extract the compounds to begin using their benefits. Our extract lab at Eagle Moon Hemp use two primary methods to extract the goodness from the raw hemp to bring you our amazing CBD products.

Whether choosing our distillate or isolate you can be sure that with our fully equipped lab and modern extraction methods you are getting the best CBD available. We take great pride in not only growing the best hemp, but also in our products derived from it. Our facility is surrounded by our hemp, which means from seed to final product it is all done in house. Leading to CBD products we can be proud of and helps to support our local community here in beautiful Deming, NM! If you have any questions, feel free to drop us a line. We would be happy to answer any questions or respond to any comments. Can’t wait to hear from you!

Eagle Moon Farms is located in beautiful and fertile Deming, New Mexico. Here we grow over 1,000 acres of hemp each year, supplying enough hemp to produce many wholesale and end customer products. We don’t stop there, we also sell our raw CBD hemp flower to be used around the world!

The raw biomass harvest is the brought to an Eagle Moon Hemp extraction facility to be processed.

Heating our material converts the CBDA present in our biomass into CBD, which means more intake by receptor in the body.

Using a double wall glass jacketed reactor distillate is mixed/heated until homogeneous mixture has been achieved.